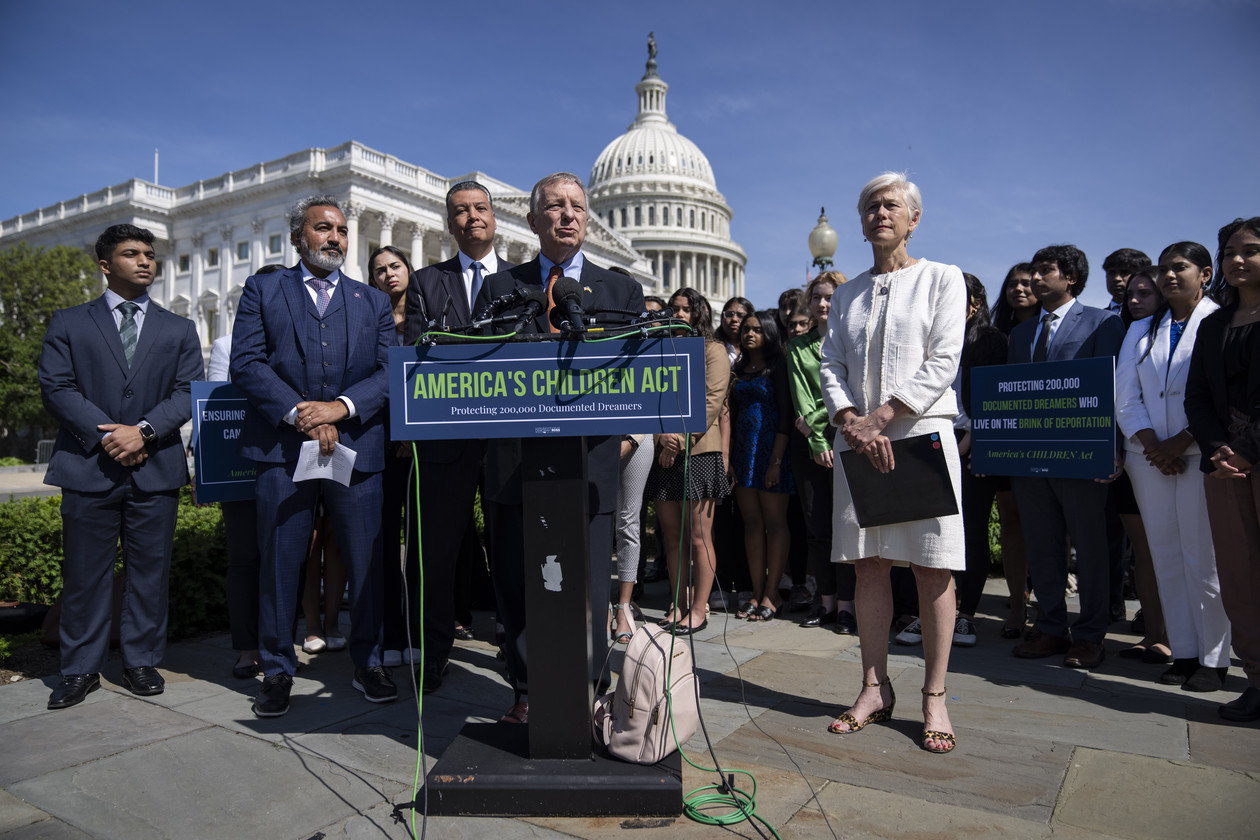 Sen. Dick Durbin speaks during a news conference calling for bipartisan legislation to protect Dreamers outside the U.S. Capitol on May 18, 2022. | Drew Angerer/Getty Images

Party leaders are pushing hard for legislation aiding the undocumented population known as "Dreamers" before Republicans take the House. But GOP senators have little interest.

Democrats eager to find a legislative solution before 2023 for young undocumented immigrants are getting a wake-up call: They need votes from Republicans who don’t want to do it.

As the GOP prepares to take the House, top Senate Democrats are desperately proclaiming that the post-election session is the best — and perhaps only — chance for Congress to act in the near term on deportation protections for the immigrants known as “Dreamers.” And with good reason: After the Senate passed a comprehensive bill in 2013, the Republican-controlled House never took it up.

That recent history has Majority Leader Chuck Schumer proclaiming that “we want to get [it] done” and Senate Judiciary Chair Dick Durbin (D-Ill.) saying that “the time to act is now.” But even those on the GOP side who once supported a fix for the deportation-protection program, known as Deferred Action for Childhood Arrivals, are now against it.

Sen. Marco Rubio (R-Fla.) said Democrats are “crazy” to try pushing for a deal now: “I think they’re just trying to do it, probably, to please some activist groups.” And Sen. Lindsey Graham (R-S.C.), Rubio’s only remaining GOP partner on the 2013 bill brokered by the so-called “Gang of Eight,” claims “there’s no way you’re going to get anybody on our side to do an immigration bill with a broken border.”

It’s the latest setback on the subject for immigration reform advocates, who are on track to end two years of unified Democratic power in Washington with no significant progress. Senate Democrats have yet to put an immigration bill on the floor, and the two narrower immigration bills the House passed this Congress never advanced across the Capitol.

There’s been some talk of efforts in the upper chamber, led by Sens. Michael Bennet (D-Colo.) and Mike Crapo (R-Idaho), to move the bipartisan House-passed immigration bill focused on easing visas for agricultural workers before 2023, but that could prove a heavy lift. And even that small step won’t dispel the gloomy post-midterms atmosphere for advocates who see a closing window for Congress to offer legal status to undocumented immigrants.

It’s “a long shot, but we’re still going to try,” Durbin said of the lame duck. Another option for Democrats: Putting an immigration bill on the floor and forcing Republicans to take a vote.

Yet any roll call this December may be a replay from the last time the House flipped from Democratic to Republican control. In 2010, most GOP senators and a handful of Democrats blocked a bill that would have granted Dreamers a path to legal status, eventually leading then-President Barack Obama to take executive action.

Now Democrats and immigration advocates argue there’s added urgency after an appeals court ruling in October left uncertain the fate of undocumented immigrants who came to the United States as children. The court deemed the DACA program illegal, but indicated that current recipients of deportation protections wouldn’t be affected amid the litigation. Advocates predict the case will end up before the Supreme Court.

“It’s not like we have five years,” said Raha Wala, vice president of strategic partnerships and advocacy at the National Immigration Law Center. “The current DACA recipients are in this state of legal limbo really in fear of the fact that the Supreme Court is going to make a final determination that: ‘Yep, this thing is unlawful and y’all are out of luck.’”

Those dire conditions aren’t moving Republicans to produce the 10 votes the Senate needs to pass anything. In fact, the politics of immigration compromise have become more fraught for the GOP ever since the Senate passed the “Gang of Eight” bill with 14 Republican votes.

Former President Donald Trump, who crushed the last real attempt at a bipartisan immigration bill in 2018, is a major factor in that. And now Senate Republicans are coming off a recent intraparty leadership fight after making the surge in border crossings a central part of their 2022 campaign message.

Sen. Josh Hawley (R-Mo.) said there would be an “unimaginable” backlash against Republicans if they cut a deal now with Democrats. And some Republicans, like Graham, suggested they wanted to wait until the new GOP-controlled House sent over a border security bill before proceeding.

Even so, Democrats say that behind the scenes Republicans are showing interest — even if they don’t admit it publicly.

“I’ve talked to my Republican colleagues about this a lot. A lot of them, like me, feel that Dreamers should at least have a pathway to citizenship,” said Sen. Mark Kelly (D-Ariz.).

The GOP focus on the border is only likely to increase after a judge last week blocked the use of “Title 42,” a Trump-era pandemic border restriction that the Biden administration continued to enforce, sparking Democratic divisions.

“It would be very difficult. We have a very short period,” said Sen. Chris Coons (D-Del.). “There’s an openness to discussions. The question is: Is there an openness to action?”

Democrats attempted to pursue immigration reform, including a pathway to legal status, along party lines last year. But that ran afoul of the chamber’s budget strictures, prompting the Senate rules referee to reject their multiple attempts. And while a bipartisan group of senators has been meeting on immigration, they are nowhere close to a deal.

Sen. Thom Tillis (R-N.C.), who is participating in those bipartisan discussions, said it won’t get any easier next year.

‘“If we don’t come to an agreement, I don’t think that we’ll be addressing it for another two to four years,” he said. “It could be challenging in a divided Congress.”

Even if there’s no floor vote on a standalone immigration bill, it’s possible that a smaller-scale proposal could get tucked into an end-of-the-year spending package. That deadline is approaching fast on Dec. 16, however, and any proposal would need buy-in from Senate Minority Leader Mitch McConnell as well as House Minority Leader Kevin McCarthy.