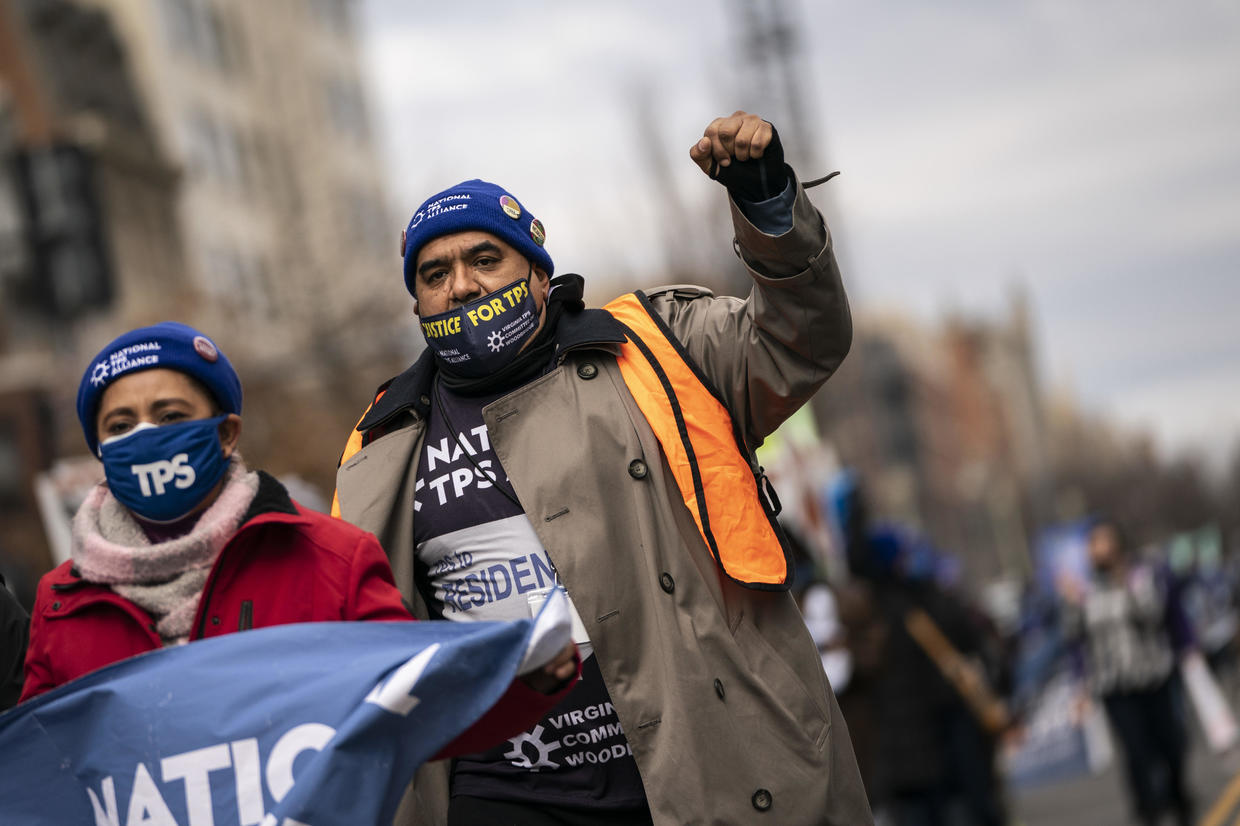 Activists and citizens with temporary protected status march toward the White House on Feb. 23, 2021, in Washington, D.C., in a call for Congress and the Biden administration to pass immigration reform legislation. (DREW ANGERER/GETTY IMAGES)

The Biden administration on Thursday said it would extend the deportation protections and work permits of an estimated 337,000 immigrants from El Salvador, Nicaragua, Nepal and Honduras through the summer of 2024, preempting a court decision that could have led to their legal status expiring next year.

The Department of Homeland Security (DHS) said in a notice that it will allow immigrants from these countries to continue living and working in the U.S. legally under the Temporary Protected Status (TPS) policy until at least June 2024. Created in 1990, TPS is a deportation relief program the U.S. can extend to nationals of countries beset by armed conflict, natural disasters or other humanitarian crises.

Thursday's announcement comes two weeks after court negotiations between the Biden administration and lawyers representing TPS holders broke down, paving the way for the Trump administration's decision to terminate the legal status of hundreds of thousands of immigrants enrolled in the program to take effect.

But in its notice on Thursday, DHS said immigrants from El Salvador, Nicaragua, Nepal and Honduras would get to keep their work permits and deportation protections at least 365 days after the department is allowed to end the TPS programs in question, or until June 30, 2024 — whichever date comes later.

The June 30, 2024, extension also applies to certain Haitian and Sudanese immigrants, but they are also eligible to apply for work permits and deportation protections under expansions of TPS programs for Haiti and Sudan announced by the Biden administration that are not affected by the litigation in federal court.

"DHS is well aware of the importance of Temporary Protected Status (TPS) in providing stability to people's lives," a DHS spokesperson said in a statement to CBS News on Thursday.

TPS allows beneficiaries to live and work in the country without fear of deportation, but it does not provide them a path to permanent residency or citizenship. Those who lose their TPS protections could become eligible for deportation, unless they apply for, and are granted, another immigration benefit.

As part of its immigration crackdown, the Trump administration tried to terminate TPS programs for hundreds of thousands of immigrants from El Salvador, Haiti, Nicaragua, Sudan, Honduras and Nepal. But those terminations were blocked in federal courts by lawsuits that argued the terminations were rooted in racial animus and not properly justified.

In September 2020, however, the 9th Circuit Court of Appeals gave the Trump administration the greenlight to end the TPS programs, saying courts could not review DHS decisions related to the policy. The ruling, however, did not take effect, because attorneys representing the TPS holders asked the court to consider rehearing the case "en banc," or with all active judges participating.

The Biden administration, which pledged to prevent the deportation of TPS holders to "unsafe" countries, entered into court negotiations to try to settle the litigation over the Trump-era termination decisions. It also formally extended the TPS programs for immigrants from Haiti and Sudan.

After a year of court negotiations, attorneys for TPS holders announced on Oct. 26 that they had failed to reach a settlement with the Biden administration. Both parties are now waiting for the 9th Circuit to decide whether it will grant or deny the request to rehear the case.

If the request is denied, the 9th Circuit's ruling from September 2020 will become binding, unless the Supreme Court intervenes.

Ahilan Arulanantham, one of the attorneys representing TPS holders in the litigation, said Thursday's announcement was an "important victory." But he called it an "interim one."

Arulanantham called on the Biden administration to create new TPS programs for El Salvador, Nicaragua, Nepal and Honduras, just like it has done for Haiti and Sudan.

Democratic lawmakers have advocated for TPS holders to be allowed to apply for permanent residency as part of a proposal to legalize unauthorized immigrants who have lived in the U.S. for years. Many TPS holders have lived in the country for over two decades. The TPS program for El Salvador, for example, began in 2001.

But congressional Democrats and Republicans have not been able to forge an agreement on immigration for decades, and GOP lawmakers have increasingly opposed creating legalization programs, absent changes to U.S. border policy.